The Difference Between Chocolate and Champagne Brown Diamonds

Traditionally, brown diamonds had a lot of names and were referred to as “chocolate”, "champagne" and "cognac" diamonds by the jewelry industry. However, due to trademarking of "chocolate diamonds" term, today only one firm on the market can use this phrase to refer to brown diamonds. Nonetheless, consumers should be aware that champagne, brown, cognac diamonds and the dessert variety are one and the same. They have no geological, mining, or processing differences and usually come from the same suppliers.  There is no difference between these stones.

Regardless of semantics, brown diamonds are an interesting gem in itself.  Recently a great deal of scientific research has been conducted in order to understand the origins of the brown color in diamonds. Along the way several processes have been identified. They are: irradiation treatment, nickel impurities, as well as, lattice inclusions associated with plastic deformation.  Of these the lattice impurities are considered the predominant cause in pure diamonds.  Interestingly, today there is a treatment that uses high-pressure and high-temperature to heal lattices and convert diamonds from brown into yellow or even colorless gems.  Such diamonds are now available on the market and carry various brand names depending on the company that processed them.  Irradiation treatments are also used in brown diamonds in order to deepen or homogenize the color of the gem (not used by Jewelry Point). 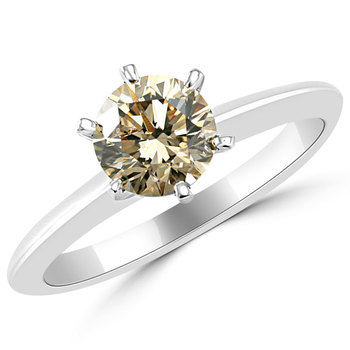 There are several historically significant brown diamonds. The Golden Jubilee diamond, which is the largest cut diamond in the world, was cut into a 545.67-carat gem from a 755.5 carat rough found in the South African mine owned by De Beers.  The Star of the South was originated in Brazil and is one of the largest diamonds found there. It was cut into a cushion shaped gem with a carat weight of 128.48ct.  The Incomparable diamond originated in Africa and is one of the largest diamonds ever found. The original rough was 890 carats and has been cut into a 407.5 carat stone (to reduce internal flaws).

Brown diamonds can have a wide variety of shades. From slightly yellow/brown to almost mocha intense - brown diamonds showcase it all. Diamonds are the hardest naturally occurring substance on earth. Due to traditional value placed on white diamonds, brown diamonds offer a nice alternative at a more budget friendly price.

Browse through our extensive collection of Champagne Diamond Engagement Rings. Our rings are available in a large assortment of precious metals and sizes. We use only high-quality clean diamonds with no visible inclusions.

All orders including customized items can be returned for a full refund within 60 days - no restocking fees, no questions asked! Learn more about our return policies.

Save now even more! JewelryPoint does not collect sales tax on orders shipped outside the state of New York or outside the USA.