What Are Peridot Gemstones 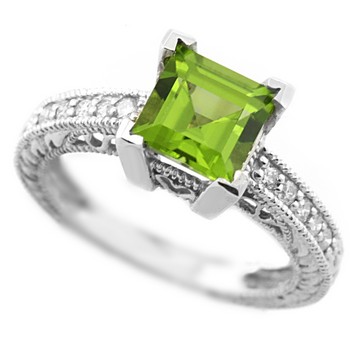 Peridot is a translusent green gemstone also referred to as gem-quality olivine.  The origins of the word are uncertain and lost in antiquity.  Ancients prized this gem for its beautiful varied color ranging from lightly yellow to almost emerald green to olive green with a distinctive golden undertone. Peridot is a silicate mineral and contains both iron and magnesium. The proportions of these metals vary slightly from gem to gem and it is these variation that give Periods their variety of shades.

Peridot forms at very high temperatures.  The stones are found in a variety of environments, as well as, lava and even meteorites. As of right now, Peridot is the only gemstone that has been found in Antartica.  However, don’t be fooled, despite the fact that olivine is mined in Egypt, US, Australia, Myanmar, Brazil, China, Mexico, Kenya, Pakistan, Norway, South Aftrica, Sri Lanka, and Tanzania, gem-quality Peridots are rare and hence are categorized as precious.

Peridot as a gem has been known since about 1500B.C.  The most significant historical source of Peridots in antiquity was the island of Zeberged (ST John's) of the coast of Egypt in the Red Sea.  Peridot has been mined there in the days of ancient Egyptian and Roman civilizations. Very likely this mine was the source of the “Biblical Stones” or the green 'topazios', famous in antiquity and one of the stones of the Jewish High Priest's breast-plate.  Pridot was also known as “evening emerald” during the ancient Roman times, as the color did not darken at night , but instead was visible as a bright green in candle light.  Peridot was popular among the Crusaders and was often used to decorate medieval churches.  Today, Peridot is the anniversary stone for 14th year of marriage and is the birthstone for August.

Through the ages crystal lore attributed many mystical powers to the peridot.  It is believed to have a calming effect, enhance speech articulation, and strengthen and regenerate the body and mind. It is also supposed to promote success in relationships and marriage.  While all of these claims are great, none have been substantiated by science. Regardless of its possible mythical powers, Peridots are beautiful unique stones with a rich history. At Jewelry Point we believe that owning such a unique piece of the earth set in a beautifully designed jewelry piece may indeed have a pleasing effect on people.

With their velvety green color, Peridots look great in necklaces, earrings, and rings.  Peridots work well as center stones surrounded by diamonds or garnets. They offer a nice alternative to emeralds and with their rich history certainly can be a great conversation starter as well.

All orders including customized items can be returned for a full refund within 60 days - no restocking fees, no questions asked! Learn more about our return policies.

Save now even more! JewelryPoint does not collect sales tax on orders shipped outside the state of New York or outside the USA.